The stochastics indicator is one of the oldest analytical tools in the market today. It was introduced in the 50s by George C. Lane, and has been popular ever since with both novice and experienced traders. It’s great advantage is its simplicity. It’s very easy to plot and evaluate it, and while it’s just as prone to generating false signals as any other indicator, the vast amount of analysis and study available means that its behavior is better understood by traders and analysts.

On a chart, the stochastics indicator looks like this: 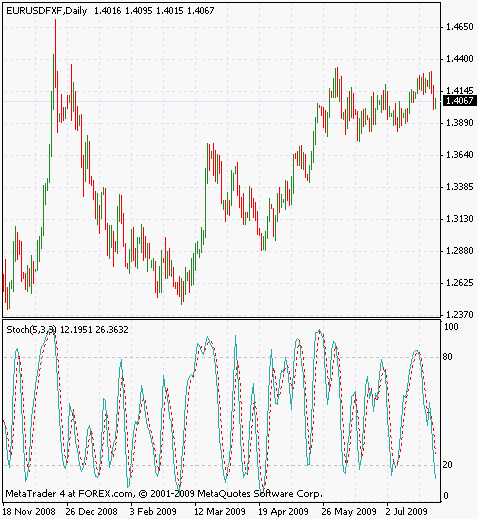 In the above chart, the faster %K component is depicted in blue, while the slower %D component is shown in red. And now we’ll discuss how to interpret and calculate these components.

Calculation of the Stochastics Indicator

The stochastics indicator is composed of two parts. The %K component is an oscillator itself, and it is usually provided separately as the Williams Oscillator in most trading software packages. Let’s first see how it is calculated, although we’ll discuss it separately under its own heading.

Here the highest high, the lowest low, indicate the values created during the entire timeframe on which the indicator is being applied.

The %D component is the 3-period MA of  %K. Both are plotted on the chart to help us derive signals. The MA can be a simple, or an exponential moving average depending on the desired degree of sensitivity to the latest market action.

The stochastics indicator is for the most part a range pattern indicator. It is used to determine overbought/oversold levels in a manner similar to the RSI. The oversold level is at 20, while the overbought level resides at 80. Although this is the most basic way of using this indicator, it is in fact rarely used because of the tendency to create false signals. Instead, as with most other oscilators, convergence/divergence patterns are sought between the price and the indicator, and then trading decisions are made sometimes supported by secondary concepts like the price extremes, or crossovers that can sometimes signal momentum changes.

Both for the fast and slow stochastics indicators, indicator crossovers are used to create trade signals on the basis of the movement of the %K component. The %K component is the faster moving of the two components, and when it rises above, or falls below the slower %D, a buy or sell signal will be generated.

Stochastics oscillator is available with just about any trading software in the market, since it is a part of the most basic technical analysis toolbox. All the major platforms provided by MGForex, Easy-Forex, ForexYard make this indicator available.

What is the best way of using the stochastics indicator? In a ranging marker, with a relatively calm trading environment, traders can use simple crossovers or overbought/oversold levels in formulating their trading strategies. In more complicated market conditions, it is probably the best choice to seek the divergence/convergence phenomenon, and to confirm with volatility indicators, or moving averages to pick only the most reliable configurations. You can, for example, choose a less volatile, ranging market as determined by the Bollinger Bands, or the ATR, for trading with the Stochastics indicator in trendless market conditions.

It is not a good idea to use the stochastics indicator in strongly trading markets, especially if you depend on overbought/oversold levels for trade decisions. Trending markets can be brutal in the way they breach these limits, and it simply is not worth the risk to try to test them with range indicators .