One of the most popular and common indicators used by forex traders today, the MACD is a trend indicator used to gauge the strength and direction of an ongoing trend. Developed in the 60s by Gerald Appel, MACD is a simple, and straightforward tool easy to grasp and use. The MACD is only useful in trending markets, and its use in ranging market conditions is in general discouraged. This is because the EMAs are highly price sensitive, and may generate false signals in the context of the lower directional momentum of a range pattern.

Calculation of the MACD

The formula of the MACD is

with the numbers indicating the period of the indicators. Also, the histogram is calculated according to the formula:

Now let’s examine the formulae to get an understanding of what the MACD is really showing us when it is drawn by the charting software. We know that an exponential moving average is a sensitive moving average emphasizing the latest period of the market action. The reader can consult the related article on this site, but in short, the EMA is used to identify the momentum of the price action, and to identify changes in direction or power at an earlier stage, compared to the SMA. The MACD goes one step further and lets us compare a short term EMA with a longer term one, and thus adds a second dimension to our evaluation of the price action. In essence, when the EMA(12) rises or falls above the EMA(26), the indication is that an emerging new trend is gathering momentum, and a new position is feasible.

The histogram can be thought of as the third and final dimension of our evaluation of the price action. Here, we compare the value of the MACD itself to the control signal of a much slower EMA(9). This EMA can of course measure 9 days, hours, or months. The resultant histogram value and the MACD value itself are used in many different ways by analysts and traders. 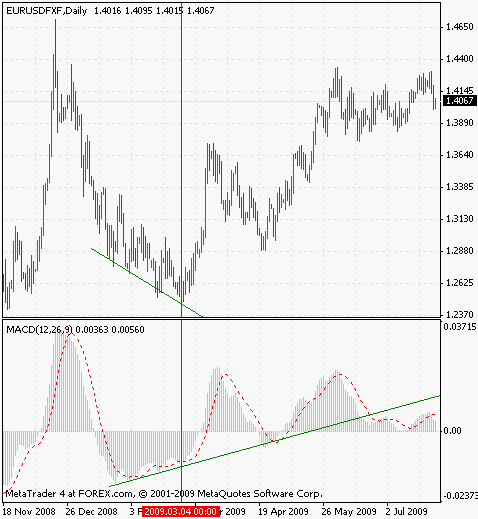 Here the grey bars in the lower section constitute the histogram. The dotted red line is the MACD itself. The line around which the histogram fluctuates is the zero-line. Apart from the obvious relationship between the tops and bottoms in the market, and the MACD’s extremes, we observe a very powerful and successful trading signal developing in a bullish convergence as indicated by the green lines on the chart. Even as the price continues to make lower lows, the MACD is making higher highs, culminating in a powerful bullish reversal later.

This graph does not show the signal line of EMA(9), but it is not necessary, because any crossover is already being showed on the histogram. The histogram changing sign (becoming negative while positive, and vice versa) indicates that a signal line crossover has occurred.

The MACD is popular, as we mentioned, so there are many different ways of using and interpreting it popular among traders today.

An MACD crossover occurs when the value of the indicator changes sign. In other words, the MACD line crosses above or below to centerline, which is the zero line on the chart above This is often thought to indicate a momentum change, that a bullish or bearish momentum is being created in the market. Another crossover occurs when the MACD crosses its signal line, that is, the EMA(9) we discussed before.  Crossovers are numerous, however, and create lots of false signals, so either use them with conservative money management methods, or confirm them with signals from other tools.

A majority of traders look for this sign exclusively when depending on the MACD indicator. A divergence/convergence indicates that the price trend is soon to run out of steam. The reversal does not depend on the nature of the trend. A down or uptrend may both experience a reversal following the appearance of a divergence/convergence pattern on the oscillator and the price.

Name any trading software, and it is more than likely that MACD is offered by it. It is simply so ubiquitous as a tool of technical analysis that it is highly unlikely to find a charting package not providing this indicator. The popular MetaTrader 4 platform, eToro are some examples from a large list that could be assembled with ease.

MACD sometimes emits false signals due to the tendency of EMAs to see trends where none exist. The price sensitive nature of this indicator makes it somewhat less reliable and a bit more prone to errors than the typical indicator. Hence comes the criticism of it often encountered at websites and forums. But that, of course, does not mean that it is exceptionally weak, or that it is not a valuable addition to a trading strategy. The key is knowing that no indicator is infallible. Only by coupling our knowledge of the indicator with a good understanding of money management strategies can we expect to be a profitable over the long term, otherwise, a bare dependency on indicators will not generate the prosperous results anticipated.