The Ichimoku Kinko Hyo, Ichimoku Cloud, Equilibrium Chart was developed by Japanese newspaper writer Goichi Hosoda in 1968, and it is more familiar to futures and equity traders than to forex traders. In spite of its lacklustre popularity, however, the indicator is powerful, and innovative, worthy of greater attention than it receives currently in the trader community. 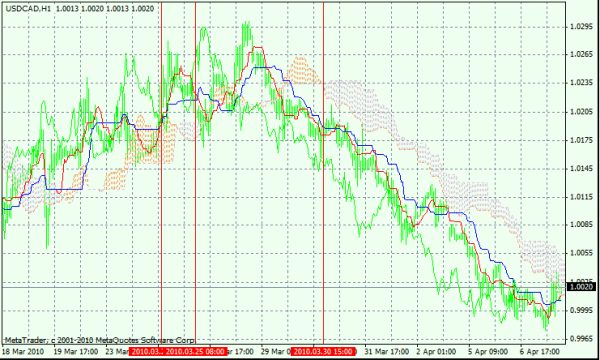 To understand how this indicator functions, we need to recall that the ichimoku cloud is a strategy more than an indicator. It combines two support/resistance levels to create a cloud, or reversal zone, and depends on the crossover of the tenkan and kijun sen to generate trade alerts. But since it is a strategy, it is not as versatile as some of the other, more basic tools like moving averages or the RSI. Thus it performs better in a more specific market type in which it is more effective as a strategy.

A typical trading scenario is generated when the red and blue lines generate a crossover, as observed on first and second vertical bars on the chart above. The purple and reddish dotted, areas, termed the cloud, or kumo, function as support/resistance levels where a possible reversal is indicated.

Let’s a take deeper look at how the indicator is calculated.

The Ichimoku Kinko Hyo indicator is calculated from four components with the following formulae:

Tenkan sen and kijun sen are essentially moving averages, and are used in a similar way with tenkan sen being the more sensitive of the two. The senkou span A and B are the main features of the ichimoku indicator separating it from an ordinary oscillator. These two values come together to create a cloud, or kumo, which is used a support or resistance level by traders depending on market conditions.

In spite of the apparent of complexity, the Ichimoku cloud is very simple and easy to use once you get a grasp of how it works, and what it is. As we mentioned at the beginning, the indicator is more of a strategy than an indicator. It combines four separate tools into a single visual framework for trade decisions.

Trade signals are generated as the tenkan sen moves below or above the slower moving kijun sen, in a way very similar to the interaction of moving averages in the MACD, or the stochastics indicators. A bearish trend is indicated by the tenkan sen moving below the kijun sen, and vice versa. Once such a signal is generated, and we anticipate the development of a trend and open a position, the kumo (cloud) of the indicator comes into the picture. As mentioned elsewhere, the cloud is the support/resistance zone of the trade. In a bearish position, we expect that the price action will remain outside of the kumo most of the time, and if it remains in that region for too long, it may be time to reconsider or close the trade. Conversely, we will maintain our position for as long as the support/resistance zone established by the cloud holds. This makes ‘letting profits run’ a much easier task than it is with a simple crossover/ support/resistance strategy, since the problems created by volatility are handled better by the ichimoku cloud.

Take profit orders can be placed at any point outside of the cloud. Stop-loss orders should be placed in or at the edge of the cloud, and money management methods must always take into account the possibility of maximum losses being incurred as the cloud support fails.

There are a couple of conclusions that we can draw from our discussion of the indicator.

The Ichimoku cloud indicator is a complex tool that provides a lot of information when it is depicted on the chart. Two moving averages, and a layered support/resistance area makes the implementation of complex strategies a possibility, but also renders the addition of any extra moving averages, vertical Fibonacci levels, or arbitrary support/resistance data superfluous. Understanding the components of the indicator, and the rationale behind its usage will be helpful in avoiding noise on our charts. If we possess credible information about where order clusters are, it is not a good idea to utilize the ichimoku kinko hyo.

The kumo, or cloud component of the indicator is useful in conditions of high market volatility where strict adherence to single support/resistance levels on the chart may result in lots of false signals and small failed trades. By providing a zone, instead of a line, this indicator can be helpful in isolating more reliable signals from noise. We could easily construct a support/resistance zone with multiple Fibonacci indicators, or simple support/resistance lines, and decrease the number of generated signals by refusing to act on mere breaches of the outer and inner lines. The strength of the Ichimoku cloud against such a strategy is automation and speed. You have to depend on the same basic formulae in all market conditions, with little manual intervention,but at the same acquire greater flexibility in your decisions.

In conclusion, we can summarise the advantages of the Ichimoku cloud as concision, automation, and simplicity. Its disadvantages are a lack of customizability, and blanket coverage for lots of possible market configurations. If you think that the particular market situation is suitable for trading with two support/resistance lines, and two moving averages, the indicator is a perfect choice. If you conclude that other or more tools are necessary, it is a good idea not to take much time with the Ichimoku cloud.

Your capital is at risk
Visit
Read Review

Your capital is at risk
Visit Free Demo