What is the Gator Oscillator?

The Gator oscillator is a forex trading tool developed by Bill Williams. It is closely related to the similar Alligator oscillator. As a trend indicator itd is most useful in markets that display strong directional action. 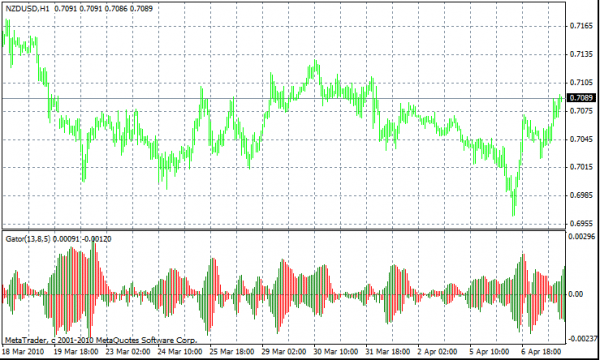 On this chart, the upper section shows the price action, while the lower part is the Gator indicator. The smoothed moving averages that create the value of the bars are not depicted on the graph. As you can see, each bar of the indicator is comprised of a lower and an upper section the interaction of which determines the way the indicator is interpreted.

The indicator is calculated according to the following formulae.

These values, called balance lines, are calculated and shifted into the future by an amount specified by the trader. If the moving averages themselves are depicted on the charts, the jaw will be blue, the teeth will be in red, and the lips will be green most of the time. In our graph, the smoothed moving averages (i.e. balance lines) are not shown.

The indicators is then evaluated on the basis of the emerging green or red patterns.

In order to interpret this indicator, we must define three states of the indicator bars.

Signifying the completion of a cycle, when the bars display different colors (any combination of red and green), the gator is ‘awaking’.

When both the bar below and the one above the centerline are green, the indicator is said to be eating.

When, after an ‘eating’ phase, the one of the upper or lower bars around the centerline turn red, the Gator is said to be sated.

When both bars above and below the centerline are red, the gator is sleeping.

The indicator is then interpreted on the basis of a hypothesis that each phase of the trend has a life cycle of its own, indicated by the awaking-eating-stopping-sleeping of the gator. When a phase of the trend is at its incipient stages, we will observe that the gator is waking, that is, one of the upper or lower bars will turn green. After that, as the trend accelerates and reaches its climax, we will note an increasing number of ‘double greens’ where both the upper and the lower bars are green. This is the eating phase. As the phase runs out of energy, and begins to slow down, one of the previously green bars will turn red, signalling that the gator is sated. And when both bars are red, the phase has ended, anticipating a new cycle.

Trading with this indicator is simple and easy. In general you open a position as the bars contract and show different colors; then maintain the position until both bars turn red, and exit to take profit. And alternative, more conservative way of using the oscillator is placing the take-profit order at the satisfaction phase. In this manner, while there is chance that some of the potential of the trade will be left unrealized, we are able to capitalize on the most violent phase of the mini trend with shorter time exposure to the market.

The main problem with this oscillator is its complicated nature. It is essentially a combination of three moving averages, and whether the addition of the graph at the bottom contributes much value, or merely complicates the picture will probably depend on your trading style. If you depend on moving averages in trading trends, the gator is a suitable tool for balancing and condensing your strategy. All the problems of trading with a moving average must be taken into account while a trader is making use of the Gator indicator. If you make use of other tools, such as the MACD, and do not favor simple moving averages, theGator may not provide a lot of additional value.

The main advantage of the Gator indicator is the compactness of its display. Instead of drawing three separate SMMAs on the chart, we have all the information provided by them packed into the bars below, which leaves enough space for the application of any number of additional indicators onto the price data.

We will conclude by repeating that the oscillator is suitable to trending markets. It is most harmonious with Fibonacci levels, or support/resistance lines due to its tendency to be volatile and unpredictable.