The Demarker indicator is named after Tom Demarker who claims to have developed this indicator to overcome the shortcomings of other overbought/oversold oscillators. There are different versions of it  in the market; in some cases the indicator uses 0 and 1 as the maximum and minimum of oscillation, while in others the typical 0-100 range is preferred.

Any level between 3 and 7 (or 30 and 70 if bigger numbers are preferred) is regarded as a neutral level characterizing a continuation phase. If the price is in an uptrend, and the indicator value is also rising, the trend is expected to go on. If we observe an uptrend, while the indicator value is falling, we’re faced with a divergence, implying that the uptrend is slowly losing momentum and may suffer an abrupt reversal. Similarly, when the price is in a downtrend, but the indicator’s value is rising, we suspect that the downtrends is weak. The oscillator and price action are converging, implying an ultimate reversal. If both the indicator and the price are in an uptrend, the interpretation is that the existing price pattern will continue to develop. 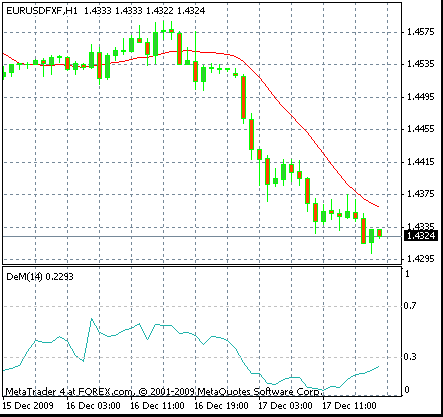 The lower section of the chart demonstrates the Demarker indicator in action. As the price fails to break through 1.4575 level, the indicator fluctuates against the neutral 0.5 level, confirming the indecision of traders. Later, however, the indicator crosses below the 0.5 level decisively, as observed on the chart, confirming the downtrend, and reaching a level very close to zero before finally reversing and approaching the signal line at 0.3. In spite of the developing divergence, price action remains conclusive however, as MA line remains safe, and no actionable, clear signal can be derived at this stage. We give this example to remind the reader once more that it is safe and prudent to avoid taking any position when clear signals backing it are lacking.

Calculation of the Indicator

The Demarker indicator is calculated by first determining a DeMin, and DeMax value, which roughly correspond to the high or low of a particular time period. The obtained values are then plugged into a formula which generates the value of the indicator itself.

Now we plug these two values into the formula below:

Taking a look at this formula, we observe that the value of the indicator will rise when the higher DeMax values are registered (in other words, market records higher highs on), and it will fall when the moving average of the lows attains higher values.

Trading with the Demarker Indicator

DeMarker Indicator is an oscillator, and it is possible to use with it all the common techniques that are applied to oscillators. The oversold and oversold levels of the indicator are at 0.3, and 0.7, respectively. When the oversold value is exceeded, the expectation is that the prices may soon stop falling. In the opposite case, we anticipate that the uptrend will run out of steam in a short time.

If you remember how the RSI is constructed, you will note that the formulation of the demarker indicator is almost the same as that of the RSI with the difference being that the RSI most often uses an exponential moving average, while the demarker indicator uses the simple moving average of the prices. But on the whole, both indicators compute the same formulae for the min-max values, and interpret them in very similar ways.

In short, it is fair to say that one will never need to create technical strategy where both the Demarker and RSI indicators are necessary. They are both oscillators, but beyond that, the great similarity between the two indicators means that using one will always grant us all the information that can be derived from the other.

The indicator is most suitable to a ranging market. If it is used in trending markets, it must be used as an auxiliary to a trend indicator, and divergence/convergence configurations must be sought out for its interpretation.

The Demarker indicator is a solid, simple and reliable oscillator in general, and can be used as a substitute for the RSI when the trader chooses to do so. It doesn’t possess any great qualities distinguishing it from the latter, however, so there is no point in creating a combination of the two in just about any conceivable scenario. Arguably, the decision to use any of these two indicators will depend on availability. It is a good idea to use one when it is available and not to worry too much about the other.