Developed by Donald Lambert and first made public in 1980, the commodity channel index is a well-known tool used by some commodity and forex traders for identifying secular moves, and trading them.

The CCI has a crossover line at zero, and an overbought level at 100, while values below -100 are regarded as signalling an oversold condition. The CCI is an oscillator. 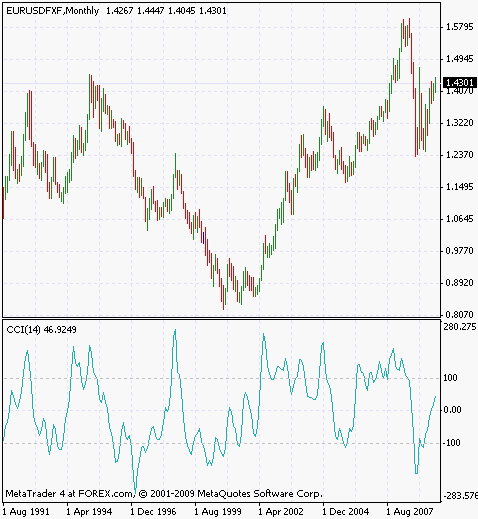 Here we see the indicator in action in the price chart above. It is interesting to note that the CCI gives many false signals even at extreme values. For example, the lowest value for our indicator, at -283.576 was recorded during a very minor, and passing bottom on the chart. As with most high sensitivity indicators using the ATR requires a lot of practice and patience in mastering it.

Calculation of the CCI

To understand how the CCI is calculated, we need to understand three different, yet simple mathematical concepts. The first is the typical price, otherwise known as the pivot point, which is the average (mean) of the high, low, and close for a trading period.

The mean absolute deviation (MAD) is the sum of the differences between the typical prices and their moving averages over the indicator’s period divided by the same. So,

The indicator is then calculated according to the formula below:

Here what we do first is subtracting the simple moving average of the typical price from the typical price itself (TP-SMA(TP). If you’ve used moving averages, it’s very easy to understand why this is being done. Remember, if the price is above the SMA, we usually interpret this as a sign that the trend is an upward one, although its momentum will be a matter of further analysis. Thus the first component (TP- (SMA (TP) determines the relationship of the price to its moving average – and also whether the indicator value is a negative or positive number. The denominator of the equation serves the purpose of comparing this difference to its historic average. Finally, the 0.015 factor is for amplifying the fluctuations in the indicator, so that the changes are easier to note visually.

So what we do is in fact just comparing the today’s equivalent of the MAD with its historic value, thus gaining an indication of how extreme today’s price is in the context of the past price action.

The CCI is used mainly as an overbought/oversold indicator similar to other indicators like the RSI. The overbought/oversold levels exists above 100, and below -100, respectively. Many traders prefer to focus on divergence/convergences between the price and the indicator with the purpose of reducing the number of trade signals, and avoiding whipsaws.

The CCI was designed for the commodity market, but any market where prices show a tendency to move in cycles will prove to be fertile ground for its use. The forex market, with its cycles dictated by interest policy, and the economic boom bust cycle, is a suitable field for the application of the CCI.

It is most important to remember that the CCI is a highly volatile indicator, and causes a lot of whipsaws. Traders need to be conservative about their risk management strategies when using it.

CCI is not as widely available as some other indicators of the same type, such as the stochastics or RSI indicators. MetaTrader, DealBook, TradeStation systems of major brokers do offer it, but due its lesser popularity among forex traders, it is a good idea to check beforehand with a demo account if it happens to be your favorite indicator.

CCI can be very useful with a few additional rules for validating its signals. As with the Williams Oscillator, you can choose to act on a signal only if it remains valid for a period of 10 days or so, leading to better, and more convincing overbought/oversold signals. Or you can combine the CCI with other indicators of different types for filtering out faulty signals. The key to using the CCI successfully is a careful approach to risk controls. It is volatile, so you should be prepared for unexpected outcomes and set your trading scenarios up in accordance.