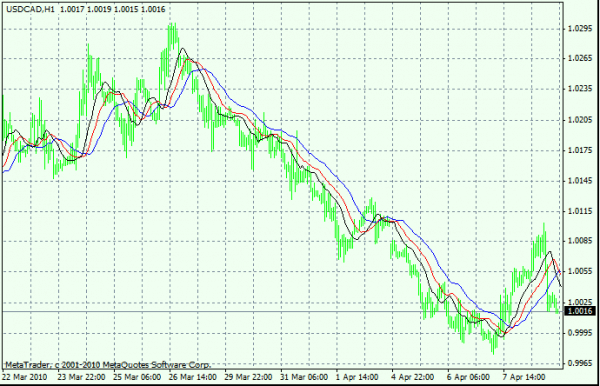 The chart looks very similar to a moving average chart, and that is what it is. The profitable phase of the market action is thought to exist between two contractions of the indicators. Every time the three components (jaw, teeth, lips) come together, and the mouth closes, an opportunity to open or close a position is presented. Trader lore states that the indicator emits correct signals about 30-50% of the time.

The Alligator indicator is really a very simple tool once you understand what it is. Three smoothed moving averages plotted on a price chart and shifted by a few bars into the future create this indicator, and the slower and the less sensitive the moving average is to market action, the further into the future it is shifted.

Jaw, or the blue line, is the 13-period smoothed moving average shifted 8 bars into the future. It is also the slowest indicator.

Teeth, or the red line, is the 8-period smoothed moving average shifted 5 bars into the future.

Lips, or the black line (although it is commonly depicted in green by charting software), is the fastest 5-period smoothed moving average, moved 3 bars into the future.

As it us the case with the Gator oscillator, the interaction between these three SMMA’s determines the trade signal.

This indicator is constructed on the notion that each trend, and its phases (or mini-trends), consist of waves that coincide with start, development, culmination and exhaustion, akin to the logic behind the Elliot Wave Theory. Similar to the Gator indicator, the four phases of the alligator’s life must be identified.

Alligator Waking: When the green, or black line falls above or below the blue line, (or when the teeth rise above or below the jaw) after a period of contraction, the alligator is said to be waking up. This is the typical indication of a beginning phase for a trend.

Alligator Eating: At this phase the mini-trend is well-established, and we see the teeth breaching through the lips, and ‘eating’ signifying that the trend is soon to reach its climax.

Alligator Sated: We now see the teeth coming back or below the blue line, and the three lines beginning to contract to a smaller area, as the price action decelerates, and the trend has run its course.

Alligator sleeping: At this phase the smoothed moving averages come together, or in more colourful language, the mouth closes as the jaw, lips and teeth adhere to each other once again. This phase signals that the current trend has exhausted itself at least in its present configuration, and it is time to sit back and reevaluate the situation.

Let’s recall what the alligator oscillator oscillator is. It is three smoothed moving averages drawn together on a chart and shifted to the left a little with the purpose of identifying profitable scenarios. As such, very little distinguishes it from a standard moving average strategy, and the differences that exist do not exceptionally favour this indicator.

The Alligator oscillator is most suitable to a trending market. It can be used in shorter timeframes in the context of an overarching range pattern, but it will surely generate many false signals in a ranging market. The best indicators to supplement it are support/resistance lines, or Fibonacci indicators to determine price targets if you happen to be beginner. Just keep in mind that trends are violent will easily invalidate any imaginary line on the charts, however strong it may appear.

If you wish to use moving averages in your trend analysis, make use of the alligator instead. Otherwise, the Ichimoku cloud, also covered on this site, may be a better choice for greater clarity and depth of analysis.